Marc Erich Latoschik and Carolin Wienrich in the lab where 120 cameras take multiple shots of a person to create an authentic avatar. (Image: Jörg Fuchs)

Obesity, which means having a high amount of extra body fat, is a widespread medical condition that affects more than 20 percent of the German population. Obesity is also a global epidemic: It is the number six cause of death in the world.

People struggling with obesity are often at war with their own bodies. A lot of them have stopped believing that they are able to lose weight at all. This state of discontentment can also have an impact on the social life and the mental health of sufferers.

These are good reasons to search for new therapeutic options. Professors Marc Erich Latoschik and Carolin Wienrich at Julius-Maximilians-Universität (JMU) Würzburg in Bavaria, Germany, are doing exactly that. They have joined forces with Professor Mario Botsch from the University of Bielefeld and with research teams from TU Munich, HTW Berlin, Gera University of Applied Sciences and the two companies, brainboost GmbH and The Captury GmbH.

The Federal Ministry of Education and Research (BMBF) funds the ViTraS project with 2.5 million euros over the next three years. ViTraS is short for "Virtual Reality Therapy by Stimulation of Modulated Body Perception".

"Obesity has various causes such as lifestyle habits, socio-cultural, psychological, or genetic factors," says Latoschik who heads the JMU Chair for Human-Computer Interaction. "So far, therapeutic approaches have focused on dietary regimes, lifestyle changes or bariatric surgery to reduce the size of the stomach. The psychological causes and consequences are often neglected."

Many people suffering from obesity have a distorted perception of their own body which complicates therapy. Major changes of bodies, e.g., of the organs, are hard to detect. Moreover, the physical appearance of the body plays an important role in almost all social situations. Obese people tend to avoid social encounters which then has a negative impact on their well-being. This is where the research teams want to take action.

"In a first step, we want patients to get a realistic image of their own body, not one that is externally influenced and judgemental," Wienrich explains. She is a junior professor at JMU. "To achieve this, we create an exact virtual replica of a person, a so-called avatar.”

To make this avatar as realistic as possible, patients are photographed by 120 cameras from different angles. Based on these images, the team from the University of Bielefeld composes a life-like replica of the body which patients can subsequently control in the virtual space.

Being confronted with one's own body in the virtual world can be strange at first – and also evoke negative feelings. "You have to get outside your comfort zone and learn to accept the virtual avatar as your own body," Wienrich says. "Once patients have got used to this, they can tap into the possibilities of the virtual environment. For example, we can create situations that can help patients break out of vicious circles in the real world."

"This confrontation, which also involves uncomfortable situations in the virtual world, is an established method in psychology," Latoschik explains. "Here in Würzburg, also the clinical Psychology researches virtual worlds to treat phobias, such as arachnophobia, through personalised simulator training. These approaches are directly put into practice by the University’s outpatient clinic for psychotherapy."

Therapy options in the virtual space

Once the patients' avatars have been brought to life in the virtual world, different therapeutic approaches can be implemented, including the possibility to customise the avatar. This enables patients to reflect on past events, such as gradually gaining weight over many years. But it also allows visualising the results of successful therapy.

"If we change the appearance or behaviour of the avatar, this can have measurable consequences for the real person," says Latoschik. For example, the technique could be used to visualise what goes on inside the body to demonstrate how excessive weight gain affects internal organs – and which positive outcomes therapy can have.

"It is impossible for most of us to imagine what we will look like in 20 or 30 years' time. Fast-forwarding time in virtual reality reveals completely new views and insights about ourselves and the potential consequences of our actions," the professor explains.

Virtual group therapy as an option

The virtual world opens up an almost unlimited freedom of applications and experiences. "Detached from the real body, people can choose an avatar of their liking and exchange experiences with other people worldwide in virtual group therapy. Body images which are otherwise perceived as negative are secondary here," Wienrich adds.

The JMU team wants to combine fundamental research with approaches capable of being implemented in practice. "Research based on virtual environments is an established method in the scientific and corporate world," the professor explains. "We combine tried and tested aspects with new technical possibilities and scientific questions."

The ViTraS project combines elements of interactive computer graphics, cognitive research and computer science. It also includes gamification which refers to the application of typical elements from computer games. "We are mainly interested in questions of game mechanics and participant motivation. This makes the project interesting for students as well," says Latoschik. Students with a matching field of study can participate in scientific work as research assistants or interns.

The German Institute for Virtual Reality (DIVR) honoured the ViTraS concept already shortly after the project launch. ViTraS won a DIVR Science Award in the Best-Impact category out of 49 applicants in total. The award was presented at the VR Science and Business Day during the Places VR Festival in Gelsenkirchen on 23 May 2019. 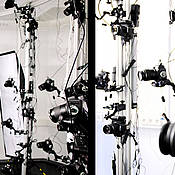 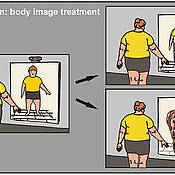 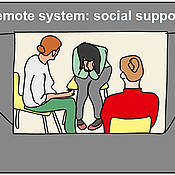 By clicking 'OK' you are leaving the web sites of the Julius-Maximilians-Universität Würzburg and will be redirected to Facebook. For information on the collection and processing of data by Facebook, refer to the social network's data privacy statement.

By clicking 'OK' you are leaving the web sites of the Julius-Maximilians-Universität Würzburg and will be redirected to Twitter. For information on the collection and processing of data by Facebook, refer to the social network's data privacy statement.