Satellites for Missions Far From Earth

What tasks can nanosatellites perform around the moon or even further away from Earth? A new study at the University of Würzburg aims to clarify this. 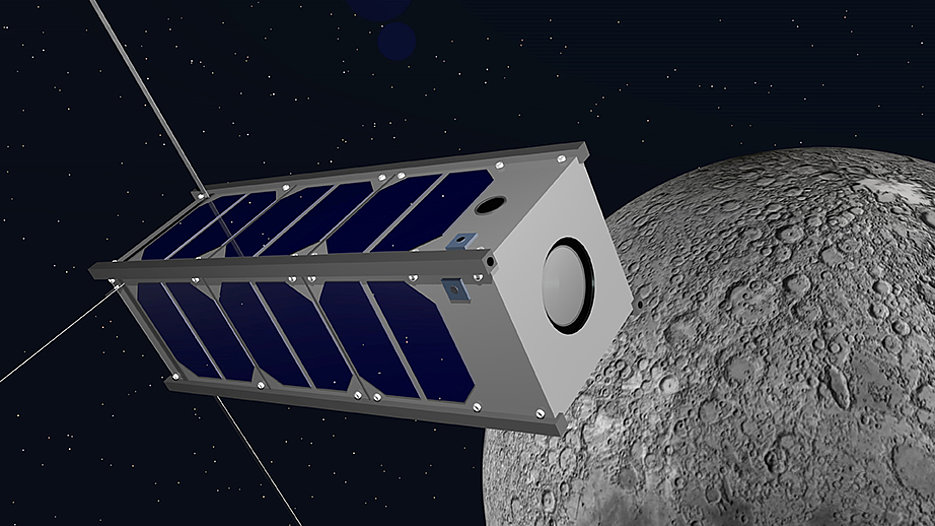 Visualisation of a nanosatellite during an extraterrestrial mission in the vicinity of the moon. (Image: Hakan Kayal / Universität Würzburg)

Satellites for communication, navigation or Earth observation do their rounds in near-Earth orbits. But it is becoming apparent that mankind will soon also be using satellites at greater distances from Earth. Nanosatellites about the size of a shoebox are already being used for lunar missions. They act partly autonomously, but also serve to support larger spacecraft.

"A good example is also the Mars Cube One mission, which consisted of two nanosatellites and supported the landing of the MarsInsight mission in 2018," says Hakan Kayal, Professor of Space Technology at Julius-Maximilians-Universität Würzburg (JMU) in Bavaria, Germany. In its Artemis programme, NASA wants to take ten nanosatellites to the moon. And the Hera asteroid mission of the European Space Agency (ESA) envisages two nanosatellites accompanying and supporting the mission.

Why are nanosatellites increasingly in demand? For one thing, their technical capabilities are growing, and for another, the cost of transporting them into interplanetary space is falling.

"At present, however, we are still at the beginning of such extraterrestrial missions," explains Professor Kayal. So far, there are hardly any commercially available components that are suitable for interplanetary missions on board nanosatellites. However, one can assume that this situation will change quickly with increasingly successful missions.

Funding from the Federal Ministry of Economics

That is why Germany also wants to keep an eye on developments in this field and not lose touch. "It seems sensible to systematically investigate the necessary technologies, the challenges, potential goals and benefits of such missions in order to create a solid basis for the use of nanosatellites in extraterrestrial applications," says the Würzburg professor.

The Interdisciplinary Research Centre for Extraterrestrial Studies (IFEX) at JMU has been entrusted with this task. The new SATEX project will start on 1 October 2022 and run for one year. It is funded by the Space Agency of the German Aerospace Center (DLR) with funds from the Federal Ministry of Economics and Climate Protection (funding code FKZ 50OO2222).

Aims of the new research project

In the SATEX project, Kayal and his team are investigating on a technical-scientific basis which focal points are suitable for the use of nanosatellite missions in extraterrestrial space from the user's point of view. At the same time, the technical possibilities in the national, European and international framework are systematically analysed in order to be able to evaluate the feasibility of scientific missions with nanosatellites. The results should make it possible to prioritise activities.

In a second step, concrete proposals for possible national missions will then be developed.

IFEX aims in particular to promote the interdisciplinary aspects of extraterrestrial science. It is closely linked to the JMU Professorship of Space Technology and its experience with the construction and operation of nanosatellites (SONATE, SONATE-2).

By clicking 'OK' you are leaving the web sites of the Julius-Maximilians-Universität Würzburg and will be redirected to Facebook. For information on the collection and processing of data by Facebook, refer to the social network's data privacy statement.

By clicking 'OK' you are leaving the web sites of the Julius-Maximilians-Universität Würzburg and will be redirected to Twitter. For information on the collection and processing of data by Facebook, refer to the social network's data privacy statement.